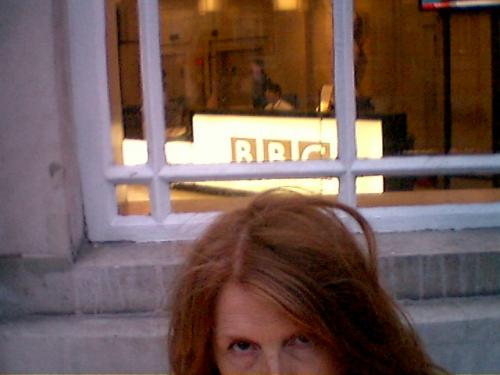 Yesterday morning, a few hours before our dress rehearsal, I participated in ‘Midweek’, a live radio show famous for its remarkably varied participants. Libby Purves is the presenter/interviewer and she navigates a strange and contradictory terrain.

Yesterday’s guests were Jane O’Neill -a female shepherd, Jason Donovan promoting his autobiography, David Bellavia, a soldier who served in Iraq and has written a book about his experiences, and myself. By the time we had heard about a sheep shearing fest in London and Jason Donovan’s relationship with Kylie, the scene was set for Bellavia. Libby Purves cheerfully quoted some horrific passages from the book in which with brutal honesty he describes the horror of killing civilians while on duty in Fallujah.

As I gazed at and listened to this man who had been so brutalised as a cog in the war machine, struggling to retain his dignity with such phrases as the “nobility” of war – I had no desire whatsoever to talk about my work.I wanted to ask more, dig deeper, give him all possible space. But the programme rolled relentlessly on and I was asked about Carmen – the reason I had been invited onto the show. I tried at least to address the absurdity of talking about an opera so hard on the heels of someone speaking about killing in Fallujah; then talked a bit about the arts as a place where we can contemplate the extremities of experience, including death – as Carmen does - but I felt ashamed of the publicity machine which picks people up like David Bellavia, chews them up, and spits them out.

Immediately after the show I asked David Bellavia how he had felt about it. He said he had hoped writing a book would somehow be cathartic, a healing of the destruction of war, but instead found he was being forced to relive it again and again.

I could feel the depth of his pain beneath his smooth and affable exterior and tried to express my solidarity – despite our obviously quite extreme political differences (I was one of those who marched against the invasion of Iraq) -with a hug and some warm words.

Yes, sheep farming is important. Okay, Jason Donovan has written a book. And I’m directing an opera. So what? When war and government politics lead to death and mass destruction and there is a participant and witness to all that in our midst, surely we should stand aside and say: speak, and we will listen.

P.S
The dress rehearsal in the afternoon went as it should: a piece almost there; it’s as yet unresolved problems fully evident, David Kempster (Escamillo) sick and replaced an hour before curtain by his cover; and Alice delivering, heroically and miraculously, against the odds.

In the interval I went to the toilets, overheard two elderly ladies, evidently regular opera-goers, tearing the production to pieces in their high, posh voices and wondered who I was working for and why.