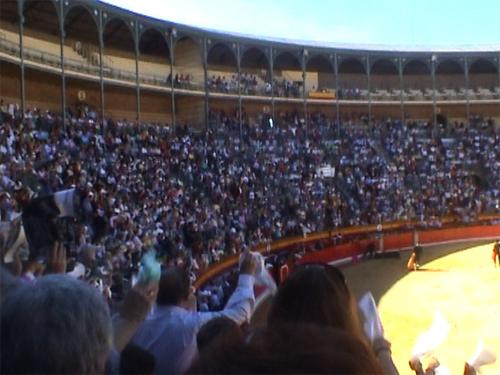 The reason we needed to research this experience is because the bullfight forms much of the central metaphor of the libretto of Carmen. It is not just the glamorous presence of Escamillo, the bullfighter in the story who's aria, the “Toreador’s song” has become so famous (an aria which Bizet himself described as ‘trash’). It is as if the entire opera is steeped in the imagery of the arena of death... an arena in which a living creature is doomed to die, while others exact ritualized moves to extinguish the beast’s wildness.

In the story it is Carmen herself, of course, who is wild and who everyone knows from the beginning (for this is a tragedy) will face extinction. But Don Jose, who eventually kills her, is, in another sense, the lumbering wounded beast who in killing her will have to face his own death as well.

As we sat in the arena in the baking hot sun, (for the seats in the shade were full) waiting for the first bull to come charging out, I started to tremble. And once the fight was underway I was often shaking and gasping so much in fear and horror at the spectacle that the camera shook beyond redemption.

But the greatest surprise for me was discovering that the entire event really seemed to be a ritualistic attempt to conquer death itself, an event in which the bull was undoubtedly the hero and the matador a strutting human doomed in his vain attempt to conquer the unconquerable (yet acting as if he had achieved it.)

The bullfight we watched was made even more horribly poignant by the fact that the ‘men’ out there were young boys. This was their first public excursion into the big arena. Their first attempt to kill. It often seemed the boys would be the ones to fall, and sometimes they did.

Their terror was palpable, however much they tried to disguise it.

But the fear of the bull was more agonizing to witness. Mute, stoic, fighting for its life: a life already lost in this ritualized context; its fate determined not by God but by man.

We emerged shaking and shaken. A couple of images from my trembling camera appear in the trailer of preparations for this production, and here are a few more moments. I can assure anyone concerned about these images that they will not be used as part of the production: but, unlike Bizet who did not feel the need to go to Spain in order to set his opera there, I felt it an absolute necessity to get behind the glamorised image of the bullfight and face its brutal reality.

For more information about the prevention of cruelty to animals visit: