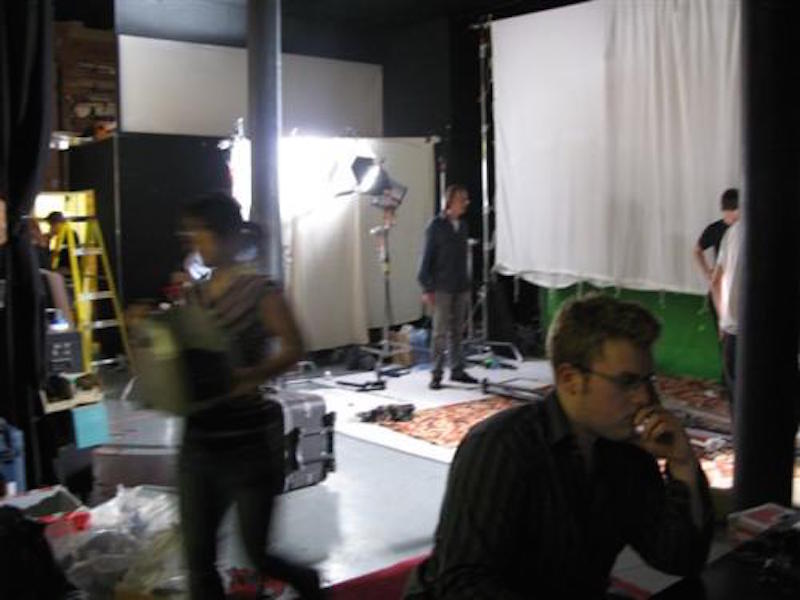 Given that the balance of characters in RAGE is a mix of the visible, familiar faces of a visible industry and – importantly -the less familiar, but equally necessary, hidden others who work in the background, I think it is time to redress the balance concerning the team who made this film.

The shooting conditions that have been described elsewhere - the actor, sound-recordist (Jean-Paul Mugel) and myself (as camera operator) working as an intimate trio behind a screen on the set - of course leaves out many others both in the immediate environment and also in post production.

Key players in this hidden team include Steve Fierberg who designed the basic lighting set-up and then subtly adjusted it for each new actor. He also watched the monitor on the other side of the screen and both encouraged my camera operating and criticized it when necessary. His enthusiasm for the whole project nourished us all and his readiness to step back from the immediate shooting process was an act of great humility for a DP. He became my second pair of eyes and watched everything with great precision and focus.

Marina Draghici and Es Devlin (who divided the work of costume design between them) helped to create the characters through their clothes. They found ways of begging, borrowing and improvising garments that were the only visual clues to the characters’ identities and had to be (in this particular imaginary setting) absolutely right. They were often inspired.

Jimmy Barnett, who had come to Adventure Pictures as his first job straight from school, had gradually become my right-hand man at the laptop; his fluency with computers and his touch-typing kept him close to the word and the image at all times right through to the live virtual premiere.

Mike Manzi at Adventure Pictures organized, telephoned and emailed our way through the maze of practical arrangements and financial agreements that are the underpinning of every feature film, and coordinated with the New York team to make it all happen.

Andy Fierberg, who had co-produced YES, once again stepped into the breach in New York, brought in the first crucial investors (including the genial Bob Heistand) and kept his New York company (Vox) and our relatively minimal production company in London in a version of harmony and efficiency under economically stressful conditions.

Some individuals came in for a day or two, notably the key makeup artists (including the great Morag Ross who was responsible for Jude Law’s hair and makeup).

I spent a productive summer with Daniel Goddard, who also edited YES, cutting and re-cutting the film until it found its form. He also skillfully graded the image and built up the soundtrack. We discovered how far one can now take a film in the cutting room. In the past, the image only achieved its look much later at the lab, and the sound was only a guide, but now it is technically possible to get the film close to its desired final result in the quiet and focused atmosphere of the cutting room.

Vincent Tulli, who had also mixed the sound on YES, took our soundtracks , ‘cleaned’ them and skillfully placed them in auditory space in a small mixing studio. We both found this a more challenging soundtrack to balance than many, given its’ crucial role in telling the story.

Digimages in Paris provided the opportunity to make the final grade on a big screen, and it is there, working long hours, that the characters’ skin-tones and the colours in the background were finally ‘fixed’ and the digital masters and a 35mm negative were created.

There were many other individuals along the way, including production coordinators, assistants, runners and a whole new team to organize the most recent premiere events in London and New York. And of course Karol Marestko and the Babelgum team who have made it possible to take the film out into the world on cell-phones and in the process have begun to reinvent distribution and exhibition.

In pre-production two of my most crucial collaborators were casting directors. I have worked with Irene Lamb since Orlando; we are as one in the long process of finding the right actors to approach. We were joined by Heidi Levitt in Los Angeles and between us went on to assemble my dream cast.

The person who worked most tirelessly behind the scenes, from start to finish, was producer Christopher Sheppard. RAGE is the fifth feature we have worked on together (the first being Orlando). It is his creativity, ingenuity and persistence that makes the difference between things happening and not happening at all. Those moments when it all seems impossible, there is no money in the bank, and no-one seems interested, are the moments when a particular kind of brilliance and stamina are called for and he has it. He somehow holds it all together. Once the film was complete it was he who pushed through the final release strategy and organized the virtual premiere, against all odds.

I have left other people out who also have done vital work on this film. The list really does go on and on, even on a film as minimal as this one. Cinema is a collaborative medium and we are truly interdependent beings at every stage of the process. The director and actors become the visible ones in the eyes of the world but couldn’t do it without the others.

But it is precisely because the list is so long (look at any end-credits, even of small low-budget films), that it becomes difficult to keep everyone’s labours fully credited along the way. It is a sort of insider knowledge.

I feel blessed to work with such generous committed individuals and want – for the record - to thank them here, even if they have not been mentioned by name.