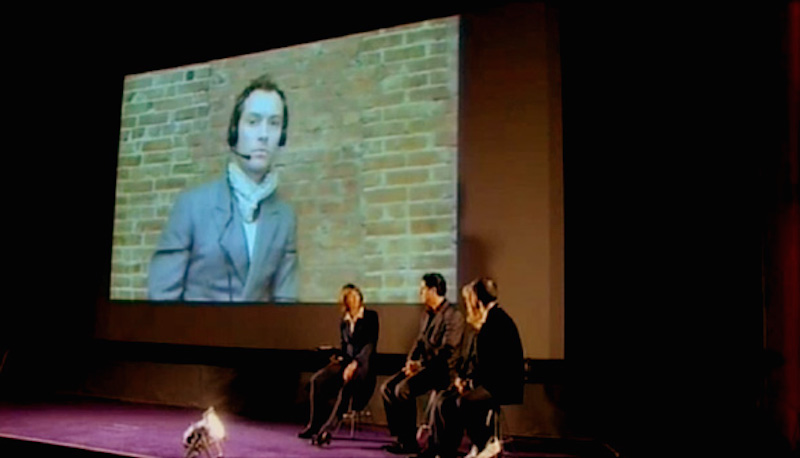 It was a wild night on the Southbank in London. There was something in the air that felt, perhaps, close to the edginess of those participating in the first broadcast of live television, or one of the earliest projections of film with sound.

An expectation of technical disaster, strange lapses of timing, an exhilarating mixture of the smooth and the raw, smoke and mirrors.

I loved the actors for their humility and their willingness to take on the challenge. Simon Abkarian and Riz Ahmed were both on stage with me for the Q and A session after the projection of RAGE, while Lily Cole, Eddie Izzard and Jude Law were present in huge grainy close-up on Skype.

Jude was participating from a room backstage at a theatre in New York, looking a little shy, somehow, and thoughtful, wearing his headset and answering questions about gender and creation carefully and articulately in the moments before going on stage as Hamlet.

Eddie, at a mystery location, faced technical challenges as echo upon echo drowned out his words. Eventually he resorted to holding up a big sheet of paper; his improvisatory skills making him the comic master of the moment. (The techno gremlins were resolved a little later).

Lily, looking serious and talking eloquently (also in New York, straight from a fashion shoot), was the living antitheses of most people’s stereotype of the ditzy model.

Francine Stock was the seamless MC, fearlessly dealing with glitches and holding it all together. And of course there were many invisible others behind the scenes who had worked tirelessly for months to pull the whole thing off.

Live interaction of this kind is a great leveller. I experience it all as the upside of globalisation; a force that - at its worst -can destroy the local and individual, or - at its best - can be the opposite : giving us the opportunity to unite in commonality and intimacy.