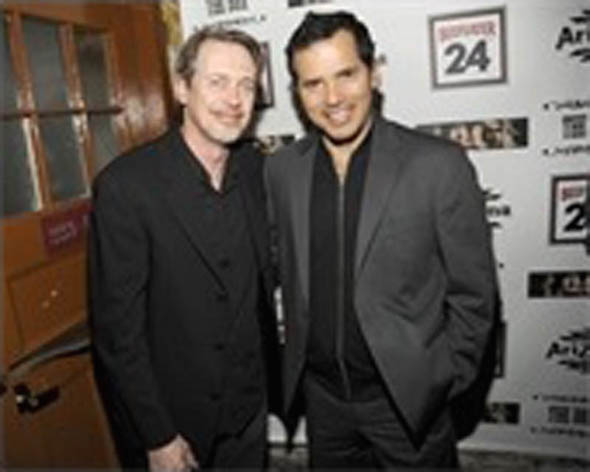 We had the NYC premiere of RAGE at ‘The Box’, a downtown club and historic architectural gem that has something of the feel of a Wild West bar and brothel, with an upper gallery, dim lighting, private booths and a racy reputation.

The image, projected onto a screen above the small stage, looked crisp and vibrant, the sound was full and intense, and the scale of the picture felt right….not too big and not too small.

As the event was more of a launch party for the cell-phone release of the film than a conventional premiere, and given the intricate, shadowy layout of the space, people were wandering around talking and looking at episode one on their iPhones as the film was playing. The whole experience was entirely unlike a reverent cinematic premiere; the pleasingly chaotic atmosphere somehow felt refreshing.

Later, at a party, people who had not been at the screening could be seen clustered in small groups around their cell-phones, watching, listening, and discussing…I felt I was seeing the beginning of a new collective viewing experience – a sentiment echoed by the journalists in my first day of interviews here. Their excitement at the idea of shaking up the whole lumbering machine of film distribution and exhibition and seeing the cautious, conservative cultural gatekeepers sidelined for the first time, was palpable.

Many of my interviewers sensed something gently historic about the moment, and I felt a vindication of all the ‘barefoot filmmaking’ decisions that we have made along the line.

One recurring question, however, given that RAGE is being put out free on cellphones and the internet was ‘But how will you make any money?” My laughter seemed to baffle them.

The answer is the unknown quantity of DVD sales, of course; the only way of making our money back in this release strategy – an entirely risky leap of faith. But I realized that this may be a moment where the smaller independent producers can be the courageous ones, for in effect we have nothing to lose.