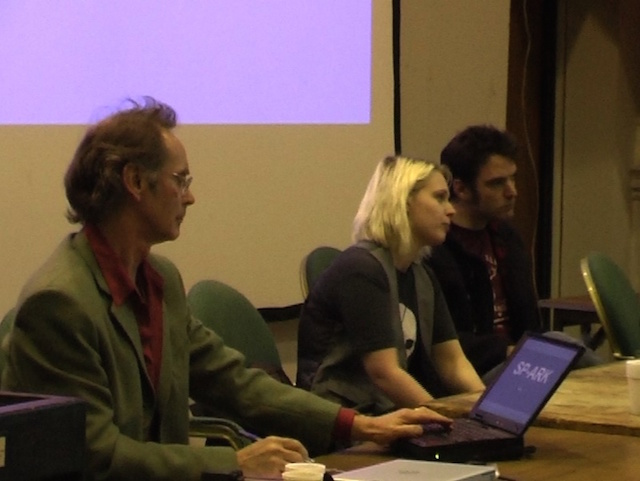 This event was the first in a series to be put on by the Open Knowledge Foundation, a group set up to ensure that the “increased and more equitable access to knowledge…as well as its collaborative development” offered by the technological revolution is actualized.

Though a day of discussions on the semantic web essentially all pertained to issues of online archiving, most immediately pertinent to SP-ARK were the insights given by Paula Ledieu during the Open Media session regarding her experience in what she frankly termed the “fuck up” that was BBC’s Creative Archive project (now, two years after its launch, in the process of a PVT). Previously Project Director of the BBC Creative Archives project, now Managing Director and Director of Open Media at Magic Lantern Productions and at OK1.0 to present on OMNI, she stressed her concern that the public had “failed to exploit the institutional momentum that presented itself a few years ago regarding public access to public assets…To enshrine archives to look at and not participate in is not acceptable”.

Whilst Potter’s work is not a public domain collection, we fully support Paula’s reasoning that it is critical that it is communicated to the BBC (as well as the BFI and those in other public sectors that hold collections) that we know they have been holding these collections in trust for the public until they can provide – as a clause in the BBC’s Charter describes – “meaningful access”. We now have the technology before us to do just this – to make our UK cultural heritage accessible to all in a participatory form. Taking this landscape into consideration SP-ARK is a clearly a timely project.

In her capacity as ex-Director for Creative Commons International, Paula also requested that the community refocus on outcomes rather than philosophy when it comes to the use and re-use of data and to question the underpinnings of a system that conflates legal and business models. SP-ARK were keen to discuss with other participants how aspects of our application might be made more open and developed within this culture of openness and free information, given the certain restrictions imposed on the project by Adventure Picture’s necessity to ‘protect’ certain uses of Sally Potter’s assets (a working, live archive still used by the original creator herself). During the Q&A George South and I discussed how the main impetus of SP-ARK was as an open learning tool, rather than the importance being placed on the redistribution of assets for secondary creative use, and that all user content would be made available through CC -or equivalent- licenses.

Saul Albert from The People Speak encouraged us to look at incorporating tools that are already actively being used by the open media community and Dr Lars Christof Armbruster invited discussion on the concept of an application (SP-ARK) being simultaneously academic and user run, citing the 911 archive at the Center for History and New Media at George Mason Universityas an academic resource that includes new media aspects and UGC and has just been acquired by the Library of Congress. Paula Ledieu and Jessica Clark from the Center for Social Media at the American University, Washington expressed their interest and a wish to hear more on SP-ARK.

Thanks to Rufus Pollock and the OKFN team for letting us get involved and congratulations on a great event.