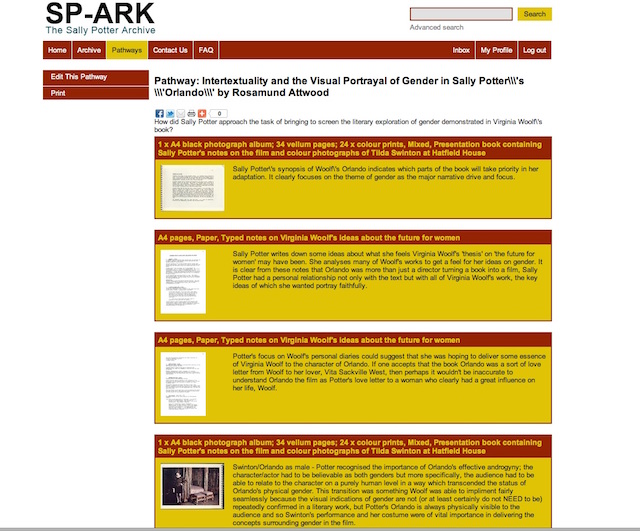 I’m a second year film student at QMUL and as part of a module I take called ‘Film, Literature and Adaptation’ we are studying Sally Potter’s adaptation of Virginia Woolf’s Orlando. The focus of study was on the way Potter as a filmmaker approached the task of transferring Woolf’s literary text to the screen, and what it could be argued was lost or gained in this transfer. We were asked to think about the intertextual nature of the film, and to construct a pathway on SP-ARK that reflects that idea.

I thought it best to focus on one specific theme within the book and concentrate on the way Sally Potter had attempted to portray this theme in the visual medium of film. I chose to focus on the theme of gender because it is such a prominent theme in both works, but also because the book portrays gender as a physical trait that does not change Orlando’s essential character – a concept which is takes on a very different form in a visual, rather than literary, medium.

I started off by just browsing through the different categories on SP-ARK, getting a feel for the site and the sort of information it provides. I looked at some of Potter’s notes, images collected by her for research, extracts from the book and storyboards. Each item on the site is ‘tagged’ at the side with various themes that you can click on to be taken to other items that relate to the same theme. I noticed that a page of Sally Potter’s notes was tagged with the word ‘gender’ so I clicked on that and was redirected to a whole range of related resources.

From there I browsed through looking for items that related to the visual portrayal of gender. I wanted to talk about the casting of Tilda Swinton as Orlando so I picked two photos of her taken in the same room, one where she is dressed as male Orlando, and one where she is female Orlando, added them to my pathway, and typed up the ideas I had about the images. I also found an image of Quentin Crisp in costume as Queen Elizabeth I, which led me to think about the significance of his career in that casting decision. I continue to browse through the site, jumping through different themes by using the tags, finding photos, videos, notes and drawings which helped generate new ideas about the concept I was addressing.

Once I had finished my pathway I decided to look at some pathways created by other people that related to the same ideas. Looking through them gave me more ideas to link back into my own and led me to other item I hadn’t seen before. With all the information and ideas I had created I was ready to write the essay that were requested to submit with the pathway. I was able to refer directly to specific resource materials in my essay and to talk about the process that Sally Potter had been through as a filmmaker to transform the book into the film, something that would not have been possible without the site.