From NY Times: In ‘The Party,’ a Portrait of a U.K. Divided by ‘Brexit’ 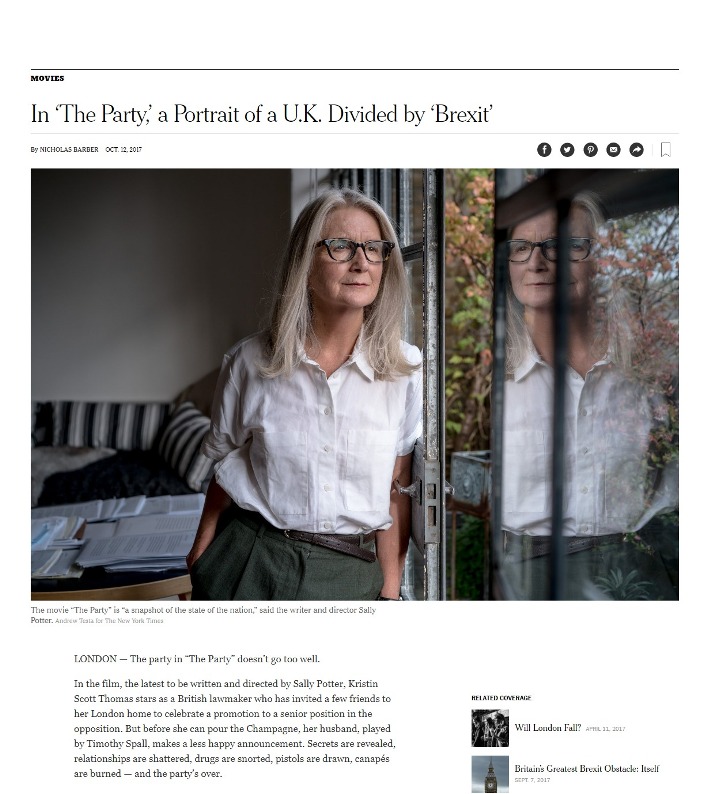 From The NY Times:

LONDON — The party in “The Party” doesn’t go too well.

In the film, the latest to be written and directed by Sally Potter, Kristin Scott Thomas stars as a British lawmaker who has invited a few friends to her London home to celebrate a promotion to a senior position in the opposition. But before she can pour the Champagne, her husband, played by Timothy Spall, makes a less happy announcement. Secrets are revealed, relationships are shattered, drugs are snorted, pistols are drawn, canapés are burned — and the party’s over.

The good news for Ms. Potter, 68, is that “The Party” is her most widely acclaimed film since her lavish adaptation of Virginia Woolf’s “Orlando” solidified her reputation in 1992. The bad news for the people of Britain is that she has called her nightmarish farce “quite consciously a snapshot of the state of the nation.”

Just before the release here in Britain this week, Ms. Potter said that the disastrous soiree was “a microcosm of a whole nation in a great political crisis, a crisis about who we are, a crisis about nationalism.”

Although she finished the screenplay before Britain voted last year to leave the European Union, and the film’s machine-gun dialogue never touches on “Brexit,” Ms. Potter had her “ear to the ground, listening to the grumblings and groanings” while she was writing, she said.

The arguments that explode between guests played by Patricia Clarkson, Bruno Ganz and Cillian Murphy represent the squabbles being played out across the country...